Can’t get the right employees with the right skills? 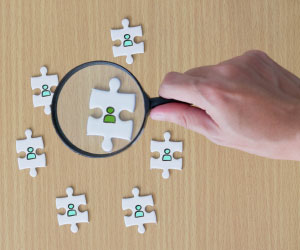 Hard to hire at all pay grades

Whatever economic partnerships the UK manages to forge in the post-Brexit future, employers are already feeling the squeeze when it comes to recruiting and retaining skilled staff. The figures speak for themselves: the Government’s Office for National Statistics reports that in the three months after the EU referendum over 100,000 EU citizens left the country.

It’s not just coffee shops and fruit farms that are struggling to hire. Last year, the Chartered Institute of Professional Development (CIPD) found that 72% of HR professionals expect the competition for well-qualified talent to increase, and 61% predict further difficulty in recruiting senior and skilled employees over the next three years.

More than ever before, employers need help to find the right people and to avoid costly hiring mistakes.

We apply IBM technology to do just that, with IBM Kenexa Employee Assessments, which unite science and technology to tackle recruitment problems. Using behavioural science techniques, IBM Kenexa measures the traits, skills and culture fit of candidates to the company and the role. Kenexa assessments can also uncover management and leadership potential and specific skills within the existing workforce.

Essentially, by asking candidates to work through questions that have been refined over many decades, IBM Kenexa scores them in four critical areas, known as the four Cs:

Note that the percentage contribution of each C will differ according to the specific role. Not all positions require high scores across the board.

It’s not a generic, one-size-fits-all test: there are more than 1,000 different tests for skills, reasoning and behaviour in the IBM Kenexa portfolio. The questions go far deeper than exploring the candidate’s educational background, which in any case has not been found to be a reliable predictor of workplace performance.

Online job application systems definitely have their advantages in streamlining the recruitment process for employers and candidates alike. However, the downside is that it makes it all too easy for candidates to apply for jobs to which they are not remotely suited. HR teams are then faced with the prospect of wading through hundreds or even thousands of applications, only a minute percentage of which are in with a chance.

Assessments from IBM Kenexa reduce the number of applicants down to a manageable residual field, filtering out all the non-starters and filtering in the stronger candidates. In this way, it makes best use of internal resources, freeing HR teams and departmental managers to focus their time on candidates with real potential.

However, IBM Kenexa’s work doesn’t stop once a candidate has successfully passed through the initial screening. The results from Kenexa personality assessments include reports and recommendations on the candidate driven by IBM’s high cognitive processing capabilities and these enable interviewers to focus on areas of the candidate’s experience that warrant further exploration or more evidence. A fantastic addition to the interview process!

We have a wide range of examples of how companies in widely differing sectors apply IBM Kenexa to meet specific recruitment needs:

In the banking and financial services sector, not surprisingly, companies have for some time been moving away from the high risk enterprises that they were at the time of the banking crash, towards more risk-averse areas. Some, like the Swiss banks, are returning to their historic wealth management roots and, as they manage this change, have been turning to IBM Kenexa assessment solutions to identify the types of traders and leaders who have the right combination of capacity, capability, commitment and culture for a more stable banking future.

Diversity and the talent pool

There’s a huge benefit in all this that is worth highlighting: IBM Kenexa is ‘blind’ to the visual cues that can influence the hiring decision. Candidates can be identified only by a personal identifier, obscuring their ethnicity, gender, sexual orientation, age, physical capabilities…

We all have internal biases, however unconscious, based on our own background and experience: good candidates identified with the help of IBM Kenexa assessments as having a great fit with the role and the organisation will be chosen on merit only. This is a great way to avoid the problems of bias in selection.

Cost-savings from getting it right

Finding the right employees is a challenge but holding onto them is also difficult. Alongside recruitment, reducing attrition is currently a top priority for employers, especially with the predicted scarcity of skilled staff post-Brexit. According to the CIPD, the turnover in the workforce is at its highest for 10 years.

By helping to fit square pegs into square holes, IBM Kenexa can help make large operational savings: as much as £5 million over three years on a 2,000-strong workforce, using assessments that screen for people who are flexible, agile and productive, committed to the company long term, and capable of progressing to supervisory, managerial, or executive and leadership roles. In short, the right people at the right time for the right job.

Find out more about the power of IBM Kenexa to solve real-world recruitment challenges by reading McDonald’s experience.