The fact and fiction of cognitive computing - part 1

Could cognitive computing destroy humankind? Both the late, great, Professor Stephen Hawking and Tesla and SpaceX CEO Elon Musk have urged caution but how seriously should we take the claim? Surely the benefits that such technologies promise must outweigh any theoretical risk?

In this blog, John Watkins of Arrow discusses definitions of cognitive computing, examines the fiction and the fact of machine intelligence, reviews the limited progress made last century with intelligent computing systems, and examines the renaissance that the field has enjoyed in recent years. 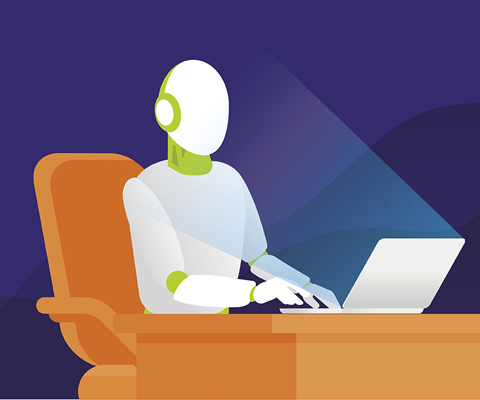 Nuclear disaster, asteroid strike, super-volcanic eruption; all of these are recognised ELE’s (Extinction Level Events) that could spell doom for human civilisation as we know it. So, when Professor Stephen Hawking adds cognitive computing to the list of things that could destroy humankind, how seriously should we take the claim? Surely the benefits that such technologies promise must outweigh any theoretical risk?

In this document, I will discuss definitions of cognitive computing, examine the fiction and the fact of machine intelligence, review the limited progress made last century with intelligent computing systems, and examine the renaissance that the field has enjoyed in recent years. I will finish with a review of the benefits (and risks) that cognitive computing can deliver, and take a look in the crystal ball to see where intelligent computer systems may take us in the future.

How do we Define Cognitive Computing?

Cognitive computing describes those computer systems that perform their tasks using human like models of thought, including the ability to:

· understand and use natural language in text and speech

· employ human models of search, such as heuristics or rules of thumb

· explore and analyse data, to identify patterns, to recognize relationships in the data, to form hypothesis and articulate conclusions, and to make predictions; these actions are typically informed by confidence levels and certainty measures

· learn by experience, to add to or modify previous knowledge, and to be able to modify their behaviour

IBM’s Watson provides a good example of a cognitive computing platform; if you haven’t seen it already, take a look at the following video of the Watson Jeopardy contest, in which Watson employs many of the above skills as it beats the two most successful Jeopardy contestants.

In the next section, I discuss humankind’s long obsession with intelligent automata, and the beginnings of its ambition to develop such systems in the real world.

The Fiction and the Fact of Machine Intelligence

It’s remarkable that people have imagined, written about, and created plays and films about intelligent automata across the centuries. Stop for a moment and list the fictional robots or intelligent computers you can think of – most of us will come up with half a dozen, many of us lots more (just out of interest, how many of the ones you are thinking about have ended up turning bad?).

People are clearly fascinated by the idea of artificially intelligent systems and the benefits that they might bring, so perhaps it’s no surprise with fact following fiction, that human-kind has been obsessed with trying to bring such systems to life.

The development of intelligent computing systems has been theorised for almost as long as we have had computing devices. As early as the 1950’s, Alan Turning had proposed a test to evaluate whether a computer system was able to exhibit intelligent behaviour.

In the latter decades of the 20th century, numerous cognitive psychologists and computer scientists (and I was one of them) performed seminal research on the theory of machine intelligence, on models of cognition, and algorithms for delivering intelligent computer behaviour. In the 80’s and 90’s there was even some success in developing artificially intelligent computing solutions, however these were very narrowly defined solutions, worked with relatively small data sets, and struggled to run on the less powerful processors available at the time.

Having promised much, but in practice having failed to deliver the new-age of artificially intelligent systems, as the noughties dawned, it seemed that cognitive computing had been parked in the crowded box marked – “Dud Computing Silver Bullets”; was that the end for machine intelligence?

In the next section, I will review the recent resurgence that cognitive computing has enjoyed, and take a look at some specific success stories.

With the advent of increasingly powerful processors, fast and plentiful memory, innovations in networking and computer communications, advances in big data and analytics, new programming techniques, and fresh research into machine cognition, the new century has seen a renaissance in the field of cognitive computing.

Cognitive Computing in Health Care: The very best practices inpatient cancer care are the province of a very small and highly knowledgeable number of practitioners and researchers. For the already large, and increasing, number of cancer sufferers, this provides a major challenge in obtaining the best treatment for their condition. In a classic use-case for cognitive computing, the knowledge and expertise of the leading practitioners in the field of cancer care has been captured and used in a smart computing solution, which provides a larger population of oncology-clinicians with access to this expertise when treating their own patients. The solution leverages the massive (and growing) volume of oncology research, clinical trials, medical records and patient details, to deliver a personalised treatment program for individual patients. One Doctor summarised the use of the solution in the following way:

“it will be like having a capable and knowledgeable ‘colleague’ who can review the current information that relates to my patient. It is fast, thorough, and has the uncanny ability to understand how the available evidence applies to the unique individual I am treating.”

Smarter Cities: At no other time in human history have there been so many people crowded into cities around the world. The people running these cities face immense challenges, such as traffic congestion, air quality, energy and water supply, law and order, public transport, etc. Cognitive solutions, using data feeds from across the city, information on historical trends, social sentiment, and best practices in city management, are playing their part in helping to manage and resolve these challenges. They are able to provide the decision makers with access to proactive and predictive guidance on likely areas of traffic congestion, probable causes of pollution, and management of peak electricity usage for example, and enable them to make informed decisions about how to rectify these issues (sometimes even before an issue has occurred)! Arrow itself is an example of an organisation that has pioneered the harvesting and analysis of social sentiment, weather, transport information and other data sources to produce the HowHappysLondon solution, which can continually assess the overall “happiness level” of the capital.

“Understanding human behaviour in relation to a city is as much about understanding and prioritising the signals of importance against the noise. In the Arrow How Happy Is London project we use multiple trained deep learning networks to constantly identify important information, and then adapt the use of that data in real time in our algorithm. This allows us to shed a static model of London and become as organic as the city. Without Cognitive computing this wouldn’t be possible.”

Please follow the following link to obtain a white paper by David on the project: https://github.com/davidfearne/howhappyslondon

Cognitive Computing Combating Cyber-Crime: hardly a week goes by without a news story about some financial organisation having been the victim of cyber-crime. Analysts put the cost of such crime as high as $2.1 Trillion, with a figure of £52 Billion in the UK alone! As cyber-criminals become increasingly smart, our response to attacks needs to be smarter. IBM is leading the way in this field, and has tasked its cognitive computing solution Watson to focus on cyber-crime.

Watson learnt about cyber-crime and security by ingesting the vast security literature (up to 500 documents a day), on topics such as IT security basics, the theory and practice of cyber-crime, historical cyber-crime, security best practices on preventing and responding to cyber-attack, the role and use of security solutions, breaking news on cyber-crime and future risk and vulnerabilities, and harvesting social media (such as reading blogs dealing with security). The result of this process will be to deliver a cognitive security solution that is aware of all aspects of cyber-crime, is able to identify when and where organisations have been attacked in the past (often without the organisation realising it), and is able to monitor communications activity and (typically in real time) identify and remediate against cyber-attacks.

Lastly, part of the power of bringing cognitive computing to bear in the security domain, its ability to reason about and identify new and novel cyber-attacks, and even to be able to predict and remediate against an attack that hasn’t even been launched yet!

The massive potential in the application of cognitive computing to cyber-security can be seen from the following quote; “Within the last 18 months, IBM’s Security Unit has quickly grown to become the largest enterprise security business in the World, with $2B revenues and with a 300% growth rate”

In my next blog, I will do some informed crystal ball gazing, and discuss potential future directions for cognitive computing, examine the real and fictional risks from cognitive computing, summarise what we have discussed across the two blogs, and end with a light-hearted epilogue.